Hospitality – A place for everybody… 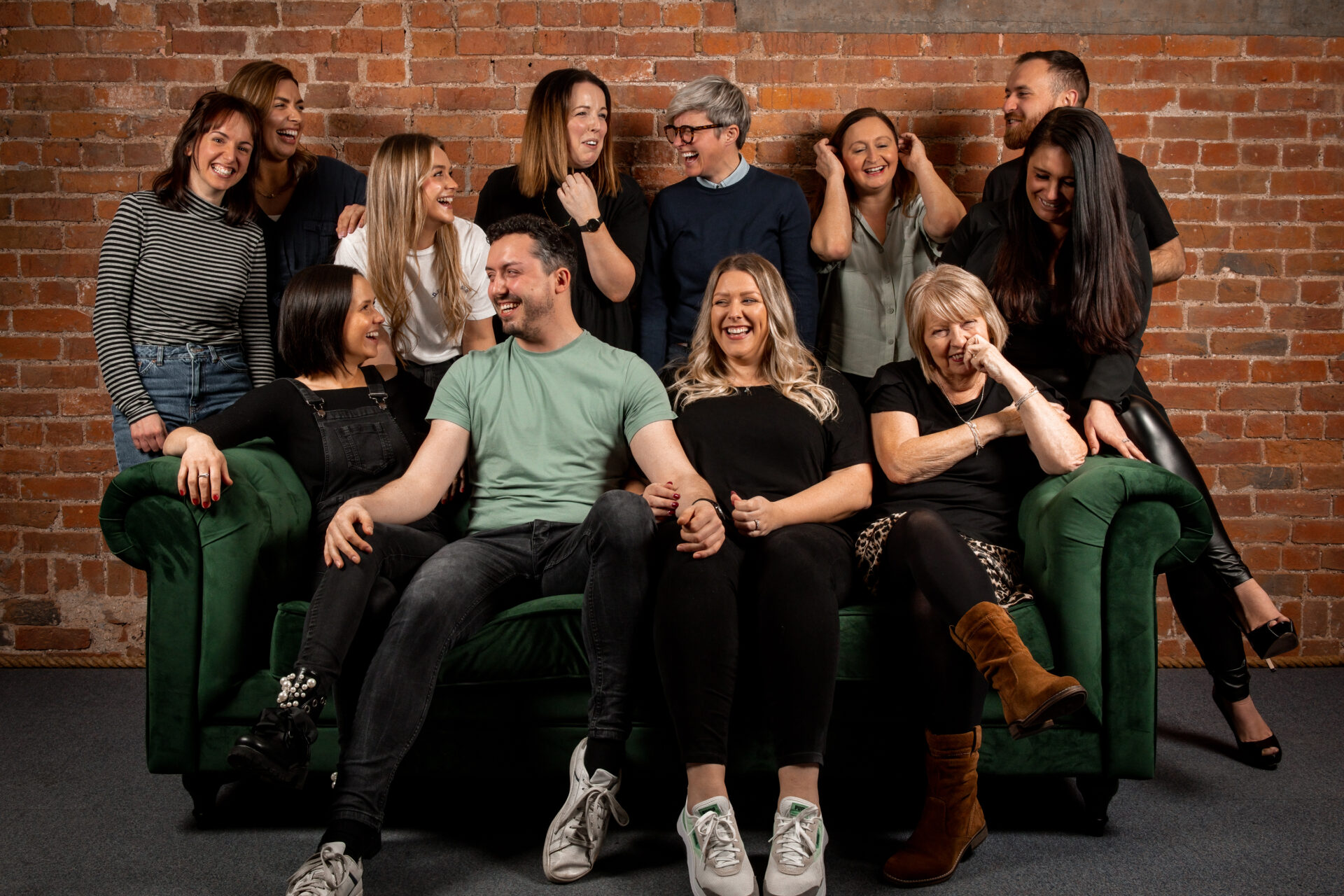 As it’s pride month and, here at 68HQ, we have several known and notorious homosexuals and bisexuals within our midst, we got to discussing what we could do to show our support to those who are less fortunate than ourselves in the LGBTQIA+ community. Fundraising through pride merch? A placement fee donation for June? A pride rainbow logo for the month? Ultimately, we decided (largely in part to Jessie writing a wonderful piece on “Tokenism as support”) that the best thing we could do to support our friends in the glorious rainbow spectrum is to continue to be ourselves. Change nothing. Continue to do what we do as an organisation. Support people.

There is no doubt that every single person on our team is an ally – to those of you out of the loop, an ally is an active supporter of the LGBTQIA+ community – and that is something we can be incredibly proud of.

We have people from many walks of life in our little team, and the one thing we all have in common is that we have all worked in the incredible industry that is hospitality. So, for this pride blog, I want to explore how the industry propagates a culture of acceptance and the role that hospitality venues have played during LGBT His/herstory. Please enjoy the ride as we journey back to what is widely considered the single most important event of the LGBT rights movement. 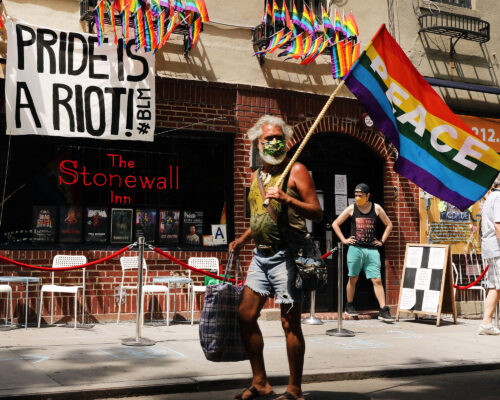 Let’s start ahead of the actual riots, for a bit of context. The Stonewall Inn was NOT, I repeat NOT a ‘gay bar’.  It was a Mafia operated speakeasy establishment that ‘allowed’ members of the same sex to slow dance together for a protection pay-off acting as a door charge, whilst serving watered down drinks in a sub-standard venue. The Mafia saw an opportunity to profit from the gathering of LGBTQ people but did very little to help the people it profited from.  Sound familiar?

Remember, this was a time when not only was it illegal to be gay or lesbian, but there was a Gender Appropriate Clothing Statute (meaning anyone considered to be in the ‘wrong clothing’ could be strip searched to check their assigned sex), the many years of the civil rights movement, anti-Vietnam war movement and a general unsettling across the globe, but especially in the US.

The police raided the Stonewall Inn. The air was unsettled on this night; The cops were particularly abusive in their handling of the trans and lesbian clientele, the released patrons didn’t run home as they previously would, people stayed, and a crowd began to gather. Stormé DeLaverie pleeded with the crowd to do something, and ‘something’ they did. 6 days of protests and violent clashes with the police ensued.

There are countless sources of what went on that night, so I won’t duplicate here, but we can see that the Stonewall Inn played an integral role in the spark of urgency amongst people of the LGBTQ+ rainbow. A ‘safe space’ invaded. The media’s panic. The state of a nation. All thanks to a little hospitality venue and it’s fabulous patrons.

There have long been venues across the UK known for ‘homosexual liaisons’ – London had The Trocadero Long Bar, The Caravan Club and Hotel De France (where Heaven Nightclub now stands).

Manchester’s ‘gay scene’ of the 60’s was located on the other side of the city, between Albert’s Square and Deansgate, however The New Union Hotel had attracted an LGBT clientele since the 40s. With the decriminalisation of homosexuality in 1967, the Deansgate scene filtered away, and more and more venues opened in the ‘Canal Street’ area. 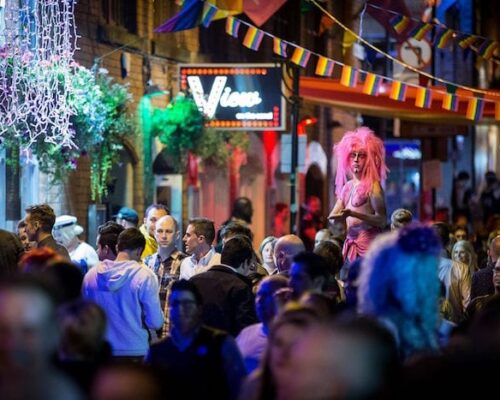 Manchester politicized the LGBT movement early with the CHE, we had openly gay councillors by the 80’s, so when Thatcher’s ‘Section 28’ induced Homophobia swept the nation, Manchester was ahead of the game, and the gay scene thrived as a result.

Manto, which opened in the early 90’s, was one of the first ever LGBT venues with a proper bar front and clear glass windows. Let that sink in. For 25 years after the decriminalisation of gay sex, the secluded, secretive, dark and dingy bars were STILL the only venues for LGBT folk.  By the opening of this venue, being queer was taken from something to hide away from, to being a stylish and open way of life.  This window into the gay way of life was key in the dispersal of the myths that LGBT people were ‘a few deviants’. An architectural revolution that caused a cultural one.  One café bar in Manchester helped change an entire cities perception of queer people.

Neo Nazi David Copeland targeted members of the black, Muslim and LGBT communities in a series of horrific attacks to ‘spark a racial war’ encouraging people to vote BNP. He injured 140 and killed 3 people.

I worked in the Admiral Duncan from 2009 through to 2014, and even then, 10 years after the attack, the venue still reeled in pain from the event.

During my time there, we wanted to help the venue move forward, celebrating its role in the community whilst respecting its history and the families of those lost.  We began introducing entertainment and since, the venue has had a new lease of life; Showcasing some of the best talent in London and the UK, being a host venue for Drag Idol and playing a central role in pride celebrations and street parties in Soho.

This change has brought the events of the Admiral Duncan to a new audience.  There is a celebration event after the annual memorial service, and many of the same regulars who used to sit in the dark depths of the Admiral Duncan are still there today, enjoying the love being shared on the stage, remembering those affected and sharing pride in the venue and themselves.  How far we have come.

The most distinct memory I have of feeling like who I am was under attack. As a 31-year-old gay man, this event stays in my mind. Another shooting in America. Shock? No. It wasn’t until the news revealed where the shooting took place that the sickness hit my stomach. Pulse Nightclub. A gay nightclub. Our people, MY people, just living. 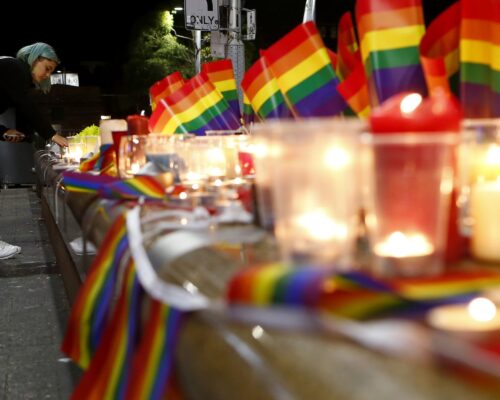 Until a man, angered by events out of our control, came into our space and started killing us.

49 dead. 53 injured. At the time, the deadliest mass murder by a single shooter ever.

As the world woke up to the news, the outpouring of love was enormous: The news never seemed to end. The celebrity messages never seemed to end. The pain was evident from everyone – straight, gay, lesbian, bisexual, transgender, everyone, we all grieved together, and we all found strength together. Vigils took place around the world. I remember feeling such pride and such emotion at our community coming together to grieve and to love and to pay our respects.

The perfect representation of how far we have come from that dingy backroom in New York, or London, or Manchester. A celebration of all things queer and F*CKING FABULOUS.

Homobloc is the biggest date in the party calendar. All are welcome and all walks of life strut, stride and prance through the doors of Depot, Mayfield and get. Their. Lives.

Everybody pressed up against every…body. A clear policy of ZERO Harassment and COMPULSORY Consent. Just pure respect and a full queer sanctuary.

I can think of no better place to bring our tour to a close. Please exit to the left and we will debrief.

So, there we go, a whistle-stop tour of the role hospitality has played throughout the LGBT movement. In no way is it all encompassing, but these four events, through the decades, show a range of LGBTQ+ experiences and the societal differences they have made.

It is no coincidence that hospitality has been at the core of many of these events.  Hospitality is a place where we can all come together.  Hospitality has provided a place for LGBTQ+ people to be themselves and over the years has helped us move out of the back streets and into the mainstream.

Even more testament to who we are as people, is the fact that even when we are attacked in our safe spaces, strength and love has followed, and over time this has come from more and more people from more walks of life.

Hospitality is a place for everybody. Come as you are. YOU are welcome.

One of our faves… Roxy Ball Room